With fresh ideas and offerings, Burlington Stores was growing and transforming itself in the off-price retail market. They were in need of a new corporate headquarters that would create a modern and dynamic workplace and display their brand for the world to see. The executive team at the new building would be supported by a large workforce of merchant buyers—young and dynamic, they moved frequently and effortlessly between locations in New York City and the company’s traditional home in Burlington, New Jersey. As such, they craved collaboration—a place to intersect with vendors and a space where they can interact with merchandise. The solution: to create a workplace that is a marketplace.

Burlington Stores sought to build its new headquarters on a previously purchased site adjacent to its existing offices. They engaged a civil engineer to develop a plan to accommodate their full office needs on a three-story footprint. The result was a deep floor plate with its dominant façades oriented away from the street and facing East and West. Given this circumstance, an opportunity existed to explore the prototypical office building with the owner in order to better realize the corporate objectives.

Burlington Stores sought to build its new headquarters on a previously purchased site adjacent to its existing offices and engaged a civil engineer to develop a plan to accommodate their full office needs in a three-story footprint. This resulted in a deep floor plate with its dominant facades oriented away from the street, facing East and West. KSS took this opportunity to explore the prototypical office building with Burlington, in order to better realize corporate objectives. To find the right fit for the right floor plate on the site, the team developed a sequence of scenarios:

This option turns away from the street requiring an expression of identity associated with a minor façade. The East / West dominant façades would need to incorporate screening elements to protect from direct sun. Light wells would be required to introduce natural light.

The depth of the floor plate has been reduced by introducing a fourth floor. The geometry has been modified to address the entrance drive, and hierarchy is created. Yet the building still suffers from large and deep floors and less than optimal solar orientation.

Understanding the desire for residual value, three “prototypical” developer office buildings are joined to form a corporate campus. While floor plates are more manageable and offer opportunities for better daylight, the workspace becomes disjointed and fails to bring the organization together.

Learning from the optimal depth of the prototype buildings and the opportunities for better integration offered by large plate solutions, a diagram is developed that extends a four-story bar of appropriate depth along the best solar orientation and toward the street. A second “building” is introduced that is lower in height and carefully positioned. An extended, rather than centralized, atrium of public space is introduced to interconnect the spaces.

Beginning with site orientation and floor plate design, an extensive, in-depth exploration revealed the most advantageous scenario: two office places interconnected by an energetic public space. That space, organized against an outdoor plaza and stretched against the whole building, provides for corporate identity towards the street, and offers program elements and spaces that together create a dynamic workplace. 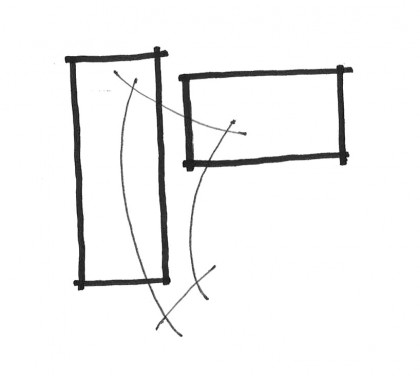 A new face of corporate identity is achieved as the bustling public space within the building opens onto the outdoor plaza in which it is nested. The ground floor of this building is where vendors and visitors come to interact with the merchant team and where that team can come together in a large and vibrant way. Vendor rooms, where garments are displayed, bought, and sold, line the major thoroughfares through the building along with large meeting rooms to accommodate town hall presentations. The upstairs workplaces are lively—there are special delineations for workstations to be left open creating a more studio-like atmosphere, encouraging and accommodating collaboration. Work groups are punctuated by kiosks that contain spaces for racked clothing and where clothes and goods can be displayed and discussed.

The atrium is stretched along the entire public space and is anchored by a café, coffee bar, and reception area, which flow together to form the marketplace. The marketplace is edged by a wall with integrated LED displays where the latest product line can be projected. A large ribbon of red hovers above this space and is visible to the outside, capturing the Burlington brand.

The vocabulary of this building is important in the conveyance of marketplace and identity. Simple office volumes are stitched with a broad and sweeping atrium space. The skeletal space is held together with the vocabulary of an open air market, with an exposed structure of light columns, king post trusses, and a graceful curtain wall suspended by columns. Yet performance as much as elegance is a criteria for the building systems. Designed to meet a standard of at least 15 percent better energy performance than permitted by code, the project incorporates high efficiency mechanical systems and lighting. In addition, the glazing systems take advantage of optimal solar orientation. The North façade’s atrium glazing remains clear allowing the interior structure and a red ribbon wall to read prominently to the exterior, while the glazing on other façades are high performance, limiting heat gain and providing an effective energy envelope.

The iconic sweep of transparent glass showcases the activity within and the synergies throughout Burlington’s new corporate headquarters. Featuring an open office layout, with a wide range of amenities and a variety of spaces, the building is designed to bring Burlington’s diverse workforce together. Employing informal meeting places and outdoor lunch spaces, avenues to walk and talk, and alcoves to think and solve, the design of the headquarters successfully interprets and translates workplace as marketplace. The collaborative, pensive, and productive site analysis process, followed by an imaginative yet practical design resulted in finding just the right fit for Burlington Stores.