On Friday, June 10, 2016, two KSS employees from Princeton gathered with dozens of students at M.H. Kreps Middle School in Hightstown, engaging in fusion-learning sessions revolving around the what, why, and how of architecture. A presentation demonstrating the significance of architecture through the lens of the Olympics kick-started the special event. An exciting challenge to build-your-own structural dome concluded the day. As one of many ongoing firm efforts to cultivate awareness and share knowledge across communities, KSS’s one-day stop at Kreps marks another successful exercise promoting civic engagement in the professional AEC industry. 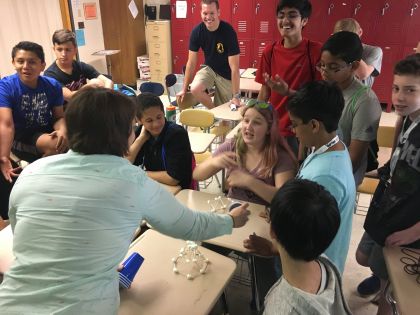 Nicole Hollenbeck, Associate, and Anna Murnane bridged the role of architecture to tangible current events, presenting on the history of architecture in the Olympics. The discussion ranged from how the built environment responded to changes in the games, to how, reflecting cultural and political climates, Olympic architecture uniquely expressed the time and place. Student teams investigated the political tension of the 1936 Berlin Olympic Stadium, analyzing how the entrance articulated political tensions. Subsequently, Nicole and Anna introduced the playful village of sweeping canopies at the 1972 Munich Olympics, a stark comparison in a changing society captured by design.

Emphasizing concepts of stewardship and the sustainable re-use of existing structures, the students grew awareness of the role of architects to transform a temporary structure for a targeted function into a lasting, meaningful space. The result of Olympic construction? Public parks, transportation systems still in use. 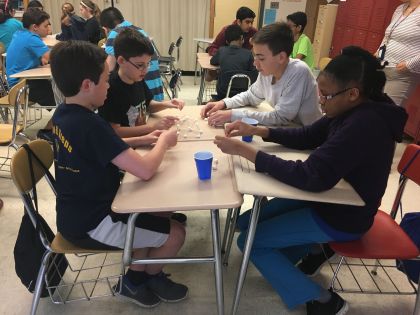 Finishing the event with an interactive group exercise, each pod of students explored methods to build a geodesic dome, using only toothpicks and marshmallows. The hands-on problem-solving offered an accessible analogue to a complicated, intimidating structure. Collaborating with the students, Anna remarked, “A truly fulfilling moment took place when I witnessed how the students played with complex design elements, unlocked by the simplicity of every-day craft materials.”

As an emergent leader in technical and digital expertise at KSS, Nicole added, “It was a wonderful opportunity to engage students in a fun, educational session about our field of work”, adding, “Particularly meaningful was the impact we made on the younger female students – one of our sessions had only 1 girl in a group of 25 total. We felt that our presence supported the movement to empower female students - to stay inspired and reach forward.” 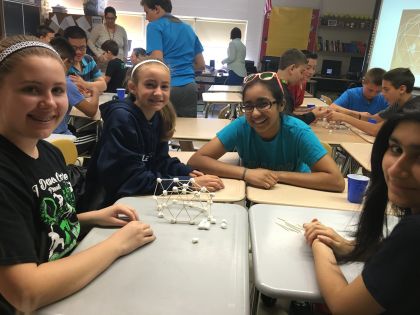 The day presented KSS the opportunity to share a sneak peek into the role of architects and of architecture to the next generation - as it relates to culture, the environment and function of a space. We sincerely thank the students, school, and our devoted employees for this wonderful opportunity.

Since the firm’s founding, KSS employees have been committed to mentoring the next generation of learners in our local communities. Practicing professionals with a purpose, our employees dedicate time to inspire and inform students about the field of architecture and design. Leading learning sessions at M. H. Kreps Middle School is one of KSS’s avenues to creating community impact, supporting early professional growth and spreading the passion of architecture. 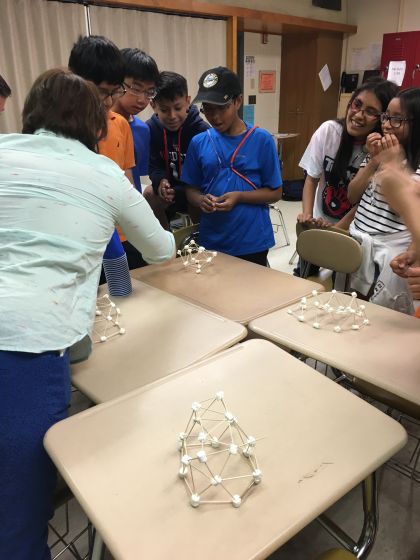 How did 19 High School Students Design a 60-Floor, Mixed-Use Tower in Center City, Philadelphia?Read MoreMentoring the Designers of the FutureRead More