Since its inception in San Francisco in 2005, Park(ing) Day has mobilized artists, activists, and citizens to creatively call attention to the importance and need for open public space. The now international event challenges participants to transform a single, metered parking space into a “parklet” – a temporary mini-park. The goal? To reclaim public space in a way that benefits those who pass through it daily, and to spark debate as to how public space is allocated, designed, and utilize

The context? Beer gardens have cropped up across Philadelphia at a rapid pace in recent years and have become integral to the city’s summer landscape. Much like parks and other public spaces, beer gardens are places where visitors can relax, escape from the city, and engage with others. A key element of the beer garden is games; offering visitors an opportunity to play creates a lively atmosphere that is conducive to and engaging for all ages. 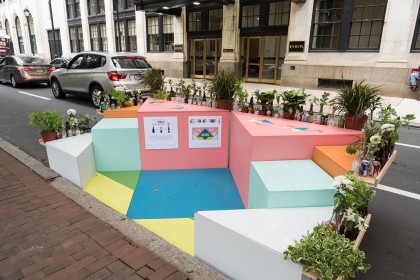 This year, Park(ing) Day participants were challenged to incorporate the theme of “playful learning” into their parklet design. Rather than simply providing games at the parklet, the KSS team took the idea one step further. After discussing the types of games usually found in a beer garden, a common theme surfaced: games that promote social interaction in a playful atmosphere. The team then brainstormed other games that accomplish the same goal and one member suggested tangrams, puzzles consisting of seven pieces that fit together within a border. As architects, the team was drawn to this game and its geometric and versatile aspects as they relate to space marking. Using the parking spaces as a border, the team set out to design a life-size tangram. 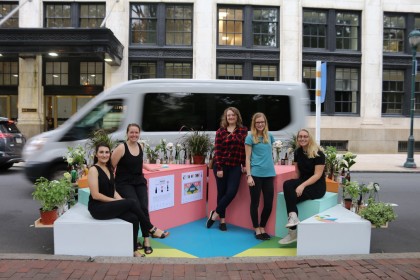 Concept and design in hand, the team met over the course of several weeks to build the components of the parklet. Team leader Jennie Himler noted how well the team navigated conflict, “We were a good-sized team. We solved problems quickly and with such a positive attitude.” On a trip to buy supplies the team determined that the dimensions of the tangram, originally 9x18 to fill the entire 160 sf of the parking space, were too large. After taping dimensions on the Home Depot floor, they decided to shrink the scale to 6x12 to allow for a more compact environment and reasonable build. 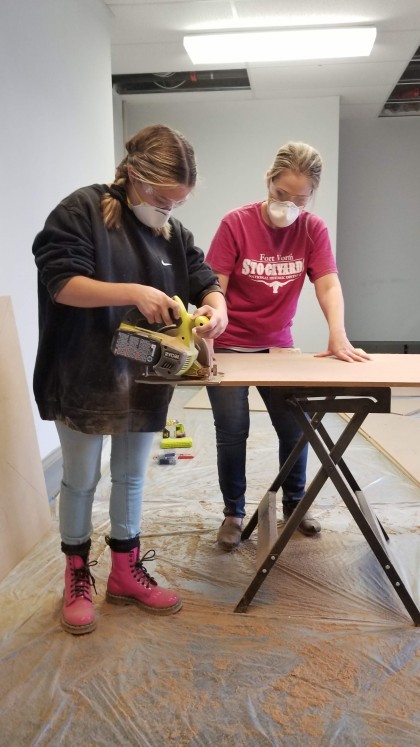 Another on-the-fly question was how to best incorporate the beer cans and bottles donated by the Pennsylvania Horticultural Society. As they were picking up the donated cans and bottles, team leaders conducted an impromptu charrette at the PHS South Street Pop Up Garden. They were inspired by the environmental factors that promote social interaction: long open tables, games, drinks, and outdoor atmosphere. After sketching and talking over different ideas, they came up with the idea to line the parklet’s perimeter with empty cans and bottles and to fill them with flowers and greenery to create a literal beer garden. 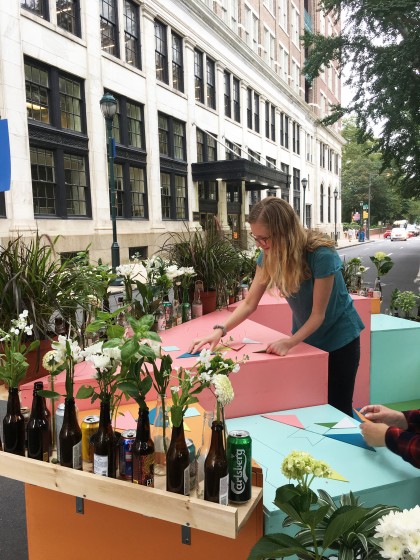 On Park(ing) Day, the team assembled Just Another Philly Beer Garden in less than 90 minutes. Blocks constructed from medium-density fibreboard fit together to create an oversized puzzle and provided seating areas and play surfaces for visitors. The parklet’s design prioritized open space with an inward focus; taller blocks along the outer edges gave way to shorter ones, drawing the eye to the center of the parklet. The bottles, cans, and greenery along the edges of the tangram created an organic partition between the urban oasis of the beer garden and the rest of the urban environment. To encourage playful learning and engage visitors, the KSS team placed several tangram puzzles throughout the space. One visitor stayed to complete each tangram. 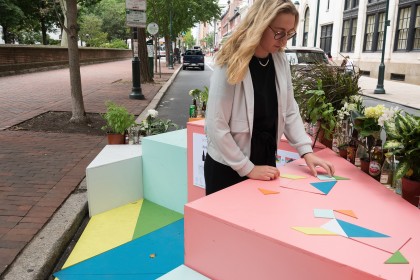 Park(ing) Day calls attention to the fact that street parking represents a large percentage of open public space in the city. By temporarily redefining a handful of parking spaces into parklets, we reclaim public space for the benefit of the community. This day-long experiment makes us wonder, what would be possible if this wasn’t temporary? What if parking spaces were strategically relocated and street parking was recovered by the community as public space? Could cities transform street parking into vibrant arteries of bike lanes, parks, nooks, restaurant seating, and more? What would that mean for those who experience urban environments daily or for those who call them home? 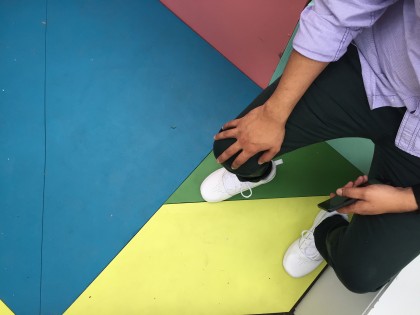 Part of playful learning is reclaiming time we have in environments we already inhabit. Many of those who encountered Just Another Philly Beer Garden did so while on their commute, lunch break, or daily run. By transforming ordinary experiences such as walking to work into opportunities for learning and engagement, we can affect meaningful and lasting change.

KSS is proud to participate in an event that prompts this kind of thoughtful debate. Since the firm’s founding, KSS employees have been committed to engaging the public through purposeful design. Practicing professionals dedicated to the local community, our employees invest time and energy to spark dialogue about society, the environment, and the world around us through architecture and design. 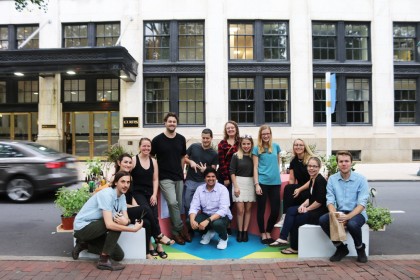 A Refocused Perception of Place and PARKing: The Sidewalk ShroudRead More