Advances in technology are not only changing how we work, but also influencing the future of the built environment and urban land use. The Urban Land Institute (ULI) and the Philadelphia Investment Development Corporation (PIDC) have partnered to explore how technology like automation, A.I., robotics, precision medicine, and advancement in e-commerce and logistics will impact the greater Philadelphia region and its use of industrial land. Dubbed the “Future of Work,” this initiative will facilitate the conversation around this topic through a series of events and research partnerships with students at Temple University and the University of Pennsylvania. KSS Partner Ed Klimek AIA, NCARB, served as a panelist at the first Future of Work event earlier this year.

Keynote speaker Susan Lund, leader of the McKinsey Global Institute, kicked off the event with a presentation focused on automation and its impact on the future of employment. According to Lund, automation will transform most jobs, though fewer than 10% of all jobs are fully automatable. Lund expanded, “the future isn’t going to be a jobless one. The jobs will be different, and humans will need to adapt.” She expects technological, social, and emotional skills to become essential, whereas demand for physical and basic cognitive skills will decrease due to automation. As jobs, skillsets, industries, and our way of life change, lifelong learning will become critical. If companies and workers can adapt, Lund envisions a future in which people earn higher wages for higher value work. She concluded,: “Now how do we get to that step in the future? I think it’s our choice. The choices we make as a society will determine where we get.”

Two panels followed Lund’s presentation, the first of which focused on innovation in technology and featured leaders from Cabaletta Bio, Penn Engineering at the University of Pennsylvania, Comcast, and Militia Hill Ventures. This conversation centered around the key drivers of innovation in Philadelphia now: biotech and telecommunications. 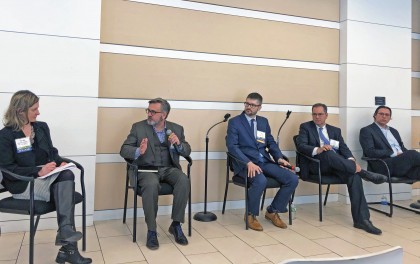 On the second panel, Ed joined experts from Liberty Property Trust, the Delaware Valley Regional Planning Commission, The ITEM Ventures, and Makerhoods.org to discuss how changes in how we work will affect urban land use and the built environment. Brian Cohen, of Liberty Property Trust, noted that existing buildings no longer meet the needs of companies and their employees; to fully support the way companies work, we have to go beyond the traditional mixed-use model. KSS’s recent work as executive architect of the University of Pennsylvania’s Pennovation Center exemplifies this concept. The building’s program supports entrepreneurs, engineers, researchers, and industry partners to translate inventiveness into viable ventures. At Pennovation, co-working space is centralized to connect offices, labs, and shared resources, allowing engineers to break out from their laboratory space and work across disciplines. What’s more, this project is the epitome of urban industrial land reimagined; Pennovation is located in a former factory on the long vacant 23-acre DuPont industrial site.

Multistory industrial development offers another glimpse into the future of urban land use. KSS has growing expertise in this new building type with multiple projects in the works in the New York Metro area including 2505 Bruckner Boulevard. Multistory developments transcend the distribution center archetype, integrating refinement, technology, office space, and retail into one dynamic environment. These buildings also incorporate elements that respond to the community, such as event space or even a sports field on the roof. Local engagement is key to this new paradigm, in which goods are made for communities, in communities. For example, rather than going to the grocery store, a consumer might order a customized meal kit that is refined, delivered, and consumed all within the same neighborhood. The urbanization of goods indicates more than the popularity of grocery delivery, it signals a shift from the mass distribution of ordinary goods to the directed distribution of valued goods. Translated into the built environment, the value of individualization will manifest in buildings and spaces that are designed to fully support the communities and people who use them.

Projects like Pennovation and 2505 Bruckner Boulevard are harbingers of the future of urban industrial land use. Whether through workplace, learning, or commerce, they usher in a new kind of mixed-use development that is user-focused and community-based. As we continue to design for this new paradigm, we are inspired by the vast opportunities to reimagine urban land use in a way that fulfills user needs and ultimately connects communities.